More Information About Fear of Harm​

Every Child is Unique

It goes without saying that all children are different from the git-go. Additionally, the degree of Fear of Harm that a child inherits can range from profoundly debilitating to much less so. While generalizations can be made about the behaviors and symptoms of FOH, as you read the information below, it is important to remember that they all exisit on a continuum. In fact, seeing the more subtle versions, the “FOH-lite” as we call it, is certainly harder than seeing the glaringly obvious one. That said, it is probably fair to say that all children affected by Fear of Harm face significant burdens and deserve the best understanding and support that we can provide to them.

a phenotype of Bipolar Disorder

AKA “Fear of Harm”

Criteria A–F are required for diagnosis and must be present most days for at least 6 months, without any symptom free periods that exceed 2 months in duration and cause functional impairment in one or more settings (e.g., significant behavioral problems at home but not necessarily in the school setting).

B: Fear of Harm

Fear that physical harm will come to self or others; easily misperceives and experiences neutral stimuli such as tone of voice or facial expression as threatening; obsessive bedtime rituals; fear of the dark; fear of intruders; separation anxiety; contamination fears; hyper-vigilance.

Three (or more) of the following are required:

Experiences thermal discomfort such as feeling hot, or excessively sweating in neutral ambient temperature environments, as well as little or no discomfort during exposure to moderate or extreme cold, and alternates noticeably between being excessively hot in the evening and cold in the morning.

Most specifically characterized by highly disturbing nightmares or night terrors resulting in fear of going to sleep and auto-traumatization.

Territorial and reactive aggression in response to limit setting and perceived threat or loss including aggressive fight-based speech or actions or self-directed aggression such as head banging, cutting or scratching self, suicidal thoughts or actions.

F: Symptoms Are Not Due to a General Medical Condition

(e.g. hypothyroidism) Criteria may overlap with symptomatology from other DSM classifications.

And/or alcoholism, as well as other bipolar spectrum disorders, lends further support to the diagnosis.

*Due to ongoing research the name of this disorder has evolved to reflect the most up to date information. The term “Fear of Harm” is used consistently throughout as a characteristic representation of the disorder. 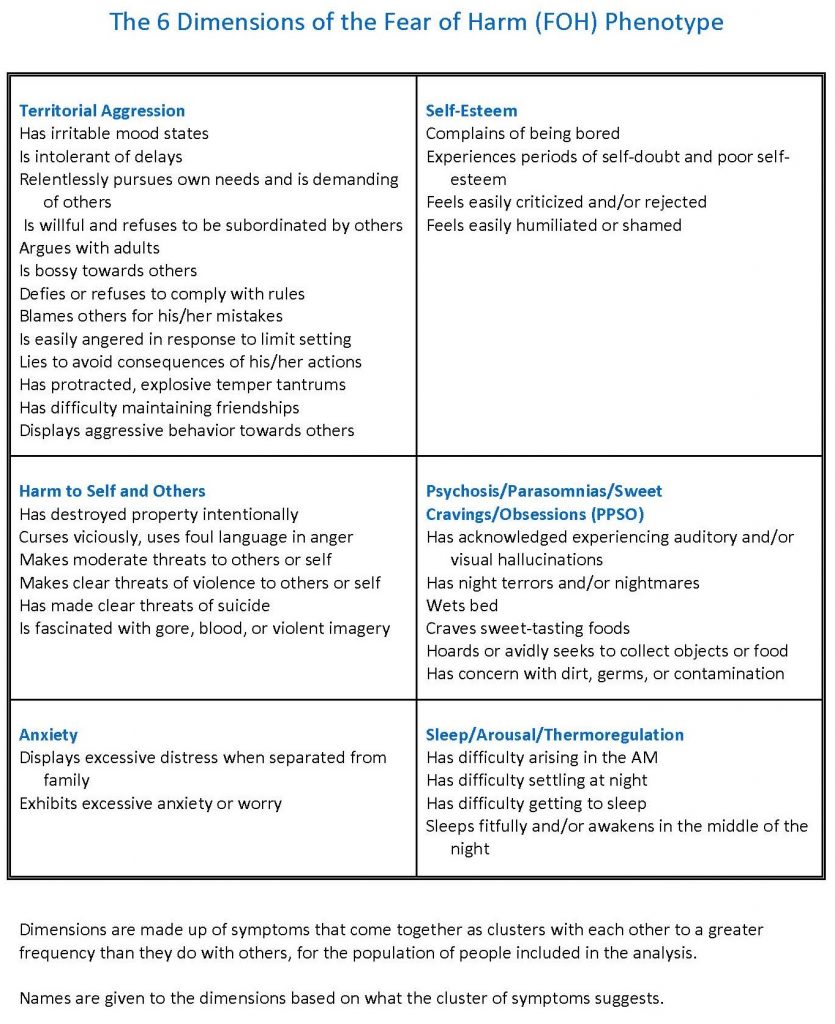 The 6 Dimensions of the Fear of Harm (FOH) Phenotype (PDF)

What is Fear of Harm?

Like Bipolar Disorder, Thermoregulatory Fear of Harm Mood Disorder includes manic and depressive symptoms. However, these are just two of the characteristics of a much broader syndrome.

Fear of Harm (FOH) is a syndrome, or collection of behaviors and symptoms, which occur along with a specific trait called “fear of harm”. The trait, which is heritable, is one of obsessive fear that harm will come to self and/or others.

Since FOH is a heritable condition, some children are much more affected by it than others.

Children with FOH have an unusually high perception of threat. The threat can be real, imagined, or psychotic.

Children with FOH typically react negatively when they feel threatened. This can be expressed as confrontation, defiance, blame, bullying, retaliatory threats, attacks, and even rage. Sometimes the child turns the aggression inward on him or herself.

Children with FOH have extremely high levels of anxiety.

While this condition can be very severe and life altering, when the symptoms are quiet, children with FOH are typically loving, insightful, bright children. They often feel terrible remorse that they cannot better control their reactions, their thoughts, and their lives.

Daily escalation of energy: In general, children with FOH have a low level of energy in the morning, which escalates during the day. There is typically a difficult period around dinner time and they can reach a high level of energy prior to bedtime.

Rapid shifts of mood: Each child is unique in terms of where they fall on the behavioral spectrum between depression and mania. But within their individual range children can shift rapidly and unpredictably between moods many times within each day. Shifts in or out of difficult moods occur either spontaneously or can be rapidly triggered by events, interactions, and/or expectations. Sometimes the shift is as sudden and dramatic as to be like a switch turned on or off.

Manic Behavior: Along a continuum from mild to extreme, children can be giddy, goofy, and attention-demanding. They may be particularly enthusiastic for their usual activities, be expansive for new activities (often of a risky nature), and/or overestimate their own (or other’s value). They can speak rapidly, have racing thoughts, and/or be more argumentative or bossy than typical. They also can have a reduced need for sleep.

Depressed behavior: Along a continuum from mild to extreme children can be filled with feelings of sadness, anxiety, self-loathing, and hopelessness. This can be accompanied by increased negative perceptions of self/events/people. They are likely to have low motivation, decreased ability to concentrate, and/or a loss of interest in things previously enjoyed; all of which lead to a feeling of intense boredom. The child might isolate, sleep excessively, speak more slowly, and have a decreased appetite.

Irritable behavior: This is the chronic “on guard” state of vigilance from which the child is quick to react negatively. Any parent of a child with FOH can tell you that they walk on eggshells, careful to avoid the triggers. It is never far below the surface. In its most extreme form it escalates to rage.

Poor frustration tolerance: It is particularly difficult for the child with FOH to delay gratification. This is easily seen with limit setting. The child wants something and wants it now and denial of the “need” is interpreted (to a greater or lesser degree) as a threat to survival. The frustration caused by waiting in line, being asked to do something that they find difficult, and of course all the challenging “nos” by a parent, causes a high degree of anxiety and reaction.

Poor self-esteem regulation: The child’s sense of self can range from unrealistically positive to overly pessimistic; largely in relation to the current state of mania or depression. In a manic mind-set the child can be arrogant, overly-optimistic, and believe him or herself to be all-knowing, superior to authority figures, and even possess super-powers. When the mood is depressed, they can be self-critical with intense feelings of shame, humiliation, worthlessness, and insecurity.

Executive function deficits: Many children with FOH have difficulty with executive functions. These are the brain functions involved in planning, working memory, attention, problem solving, verbal reasoning, inhibition, mental flexibility, task switching, and the initiation/monitoring of actions. Problems with some of these functions are expressed as :

The extra challenges created by these deficits contribute significantly and inextricably to the overall levels of anxiety and obstacles that the child lives with.

Because of these executive function deficits many children might mistakenly receive a diagnosis of ADHD. While indeed the observed symptoms might be ADHD, there are subtle variations which would distinguish between the two conditions.

What is Fear of Harm? (PDF)

Ketamine in the Treatment of Fear of Harm (PDF)

JBRF is a 501(c)(3) organization. Donations are tax deductible to the extent permitted by law.

The Clinician’s Pathway Program (CPP) and its assessment tools, the CBQ and JJ, were developed by Dr. Demitri Papolos. By clicking the links below you will leave www.jbrf.org and be redirected to the research site that contains the CPP and the CBQ & JJ assessments. If you have any questions or concerns regarding these tools please direct them to Dr. Papolos’s system administrator at CPP@drpapolos.com

Scoring for assessments within the CPP is a fee-based service offered by the private practice of Demitri Papolos, M.D.; this service is independent of JBRF but may be accessed through the JBRF website. Dr. Papolos developed the CBQ & JJ measures and their automated scoring report with the support of JBRF. Questions and/or concerns with regard to the scored report should be addressed to CPP@drpapolos.com